Tradition and craftsmanship from father to son

Kramers’ Seafood is located on Urk, a former island in the Zuiderzee. Urk traditionally lives from the sea. Its own fishing fleet provided for a flourishing trade of many types of fish from the North Sea. Since 1932, the Afsluitdijk marked the border between the Wadden Sea and the IJsselmeer; a dike connected Urk to the mainland from 1939; and the Noordoostpolder was dry milled in 1942, thus, Urk is no longer an island. Urk is now on the IJsselmeer and has its own harbour, but the Urker fishing fleet (UK) can now be found on many international fishing grounds. Its own fish auction, fishing, processing and trading in fish and fish products, renders this a very important economic basis for Urk. Hundreds of years of experience and technical expertise are stored here. It is not without reason that Urk is the fishing centre of The Netherlands. 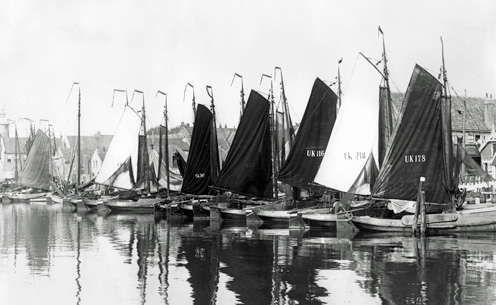 After the catch, our fish is immediately processed, sorted, cooled or deep-frozen, packaged and distributed. From the catch to our buyer, the fish is continuously chilled or frozen. This requires a high level of traditional craftsmanship and modern techniques throughout the entire chain of capture, processing and distribution. The Dutch fishing industry can take advantage of this.

Thanks to our many years of experience and the long-term and stable relationships with our customers, we can call ourselves a reliable partner, supplying the right, high-quality fish products.

We will continue to follow market developments in the coming years, and we are happy to share our market knowledge and products. We would like to be a strategic partner that adds value through our open and personal collaboration.